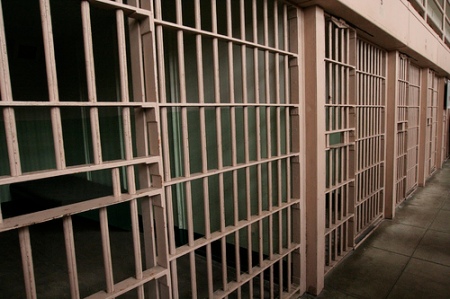 In our guest book is the signature of an individual now in prison awaiting trial.  I mean this in a very literal sense, unfortunately.  A friend who once enjoyed a meal and fellowship in our home is now preparing for trial in the US legal system.  It’s a scary thought, and has been weighing heavily on my mind ever since I found out.  It’s a strange feeling to know someone who might be labelled a “criminal.”  But I have a confession to make myself.  It’s a deep, dark secret I try to hide.  I, too, am a criminal.

Look with me at Jesus’ words from this past Sunday’s Gospel.  We’re still in the Sermon on the Mount, in Matthew 5:17-37. Here Jesus is expounding upon what the Law really means.  He drops the bombshell that even just being angry with someone or calling them a fool is the same as murder.  Ouch.  He explains that just looking at someone else lustfully is the same as committing adultery.  Whoa.  This is serious stuff, dear ones.  He’s showing us again and again, with each example, that none of us has kept even one single commandment perfectly.  Under these impossible demands, have you ever committed murder?  I have.  Have you committed adultery?  Guilty.  Stolen anything?  Yep.  Do you ever break the 8th commandment by bearing false witness?  Multiple times a day.  Do you covet?  I do.  So look at that impressive laundry list of crimes.  We are all guilty of every single one of those in God’s courtroom.  If ever you think yourself as a pretty “good” person, read Luther’s explanation of the commandments in the Large Catechism.  He does much the same thing as Jesus does in Matthew 5, going into greater detail about the condition of the human heart.  Sin isn’t just the outward act- it’s what goes on in one’s heart and mind.  And we’re all dirty, rotten criminals.

So are you feeling pretty lousy about now?  Good. That’s the point of the Law. But look at the legal language John uses in 1 John 2:1.  “But if anyone does sin, we have an advocate with the Father, Jesus Christ the righteous.”  That’s the ESV version. The NIV says that “we have one who speaks to the Father in our defense.”  The Greek word used here denotes legal terminology.  Jesus is our defense lawyer.  Read what the study notes say in The Lutheran Study Bible regarding the word advocate: “Jesus is the mediator between God and man.  As such, Jesus is our defender, our intercessor, who constantly presses evidence in God’s court of justice in favor of our pardon” (p 2173).  What an incredible picture!  And what evidence does Jesus present in God’s court of justice?  Himself, dear one.  He needs only one piece of evidence- His own perfect life, death, and resurrection.  He only needs to show the nail markings in His perfect hands.  1 John 2:2 continues, “He [Jesus] is the propitiation for our sins, and not for ours only, but also for the sins of the whole world.” To propitiate is to appease, to make satisfaction for something.  Jesus appeased the Father’s wrath against sin- yours, mine, everyone’s.  We deserved the death sentence, but our Savior took that for us.  Colossians 2:13-14 assures us that “You, who were dead in your trespasses… God made alive together with him, having forgiven us all our trespasses, by cancelling the record of debt that stood against us with its legal demands.  This he set aside, nailing it to the cross.”  Wow.  It gives me chills even to read those words.  That’s an amazing God we have.

So you, murderer, adulterer, thief, liar, sinner, you are indeed guilty as charged.  But take heart.  Your defense lawyer is out of this world.  That guilty verdict has been overruled.  God sees Christ’s righteousness when He looks at you.  He has declared you innocent.  Now.  Forever.

Photo is Bars by foreverdigital