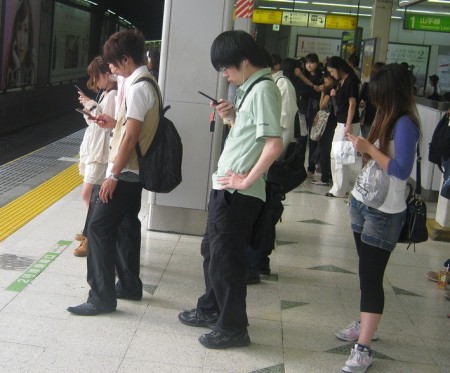 I have a love-hate relationship with technology. On the one hand, I love this world of instant information. It’s amazing to pull up the Internet on your phone and find an answer to a question. It’s fun to check Facebook or Twitter wherever you are. It’s neat to Google a recipe or order a book or (ahem) read a blog post or two. Texting has formed a closer relationship between my brother and me and keeps me in touch with friends who are far away.  And since I do, after all, keep a blog, I honestly can’t do without a computer and access to the Internet. So there are certainly many good things about technology.

On the other hand, though, I hate what technology is doing to our society. You’ve seen pictures or videos of people so absorbed in their phones that they’re missing out on what’s happening around them. We’ve likely all been on the receiving end of someone so engrossed in the screen in front of them that they ignore us as we’re standing right there. And if we’re honest, we should admit we have also been on the giving end of that equation.  But who are the people who suffer from this disconnect?  Most often, it is our families.  Our spouses and our children, the very people we love the most in the world.  How ironic that a phone that can fit into a pocket is often so distracting that we ignore our own families in favor of its luring, glowing screen.

So what can we do?  Technology is here to stay.  No matter how we lament the rise of iPhone usage, computers, video games, etc, these things aren’t likely to fade into the background any time soon.  No, we have to change the way we deal with them.  I would direct your attention to two excellent articles written on the subject.  First, an article by Jarrid Wilson, called Why I’m Getting a Divorce in 2014.  If you haven’t seen it before, it’s not what you think.  The title is there to draw you in.  It’s not his wife he’s divorcing.  Read that article, and follow the advice he gives. Do it for the sake of your family.

The other article is more disturbing, and it’s certainly not the only one of its kind out there.  It’s a recent study by CBS, and the article is called Parents Absorbed in Smartphones Scold Kids more Harshly in Study.  The title alone says it all, but read the article and see for yourself where you fit in.  They observed people at a fast food restaurant (yes, during a meal, folks), and of the 55 interactions, only 15 adults did not take out their smartphones during the meal.  That’s a staggering statistic.  That means that 73% of the adults were using their phones in some way or another during a meal out.  And of course, when the kids in their charge acted up to get their attention, the parents or caregivers were upset at being interrupted and thus yelled more than the situation merited.  I can see that, because I’ve been there, and I’m sure most of you have as well.  When you’re distracted and a kid interrupts you, what do you do?  Yell at them to cut it out.  But what are we teaching them?  That the phone in your hand or the computer in front of you is more important to you than they are.  Once in a while, it happens to everyone, and if it’s fairly uncommon, the kids won’t be affected by this.  But if it becomes a pattern, you’d better believe they’ll get the message that they aren’t nearly as much a priority as your precious phone.  And then what?  They retreat to their own rooms to play their DS or Xbox or watch a DVD, and then we lament over the fact that the next generation can’t do anything beyond play video games all day.  We are part of the problem.

So what can we do?  First, remember that your phone is, well, a phone.  Use it as such.  I’ve recently cut way back on the ways I use my phone.  I have a Bible app, but when I read devotions to my kids, I pull out my Concordia Self-Study Bible.  I used to write notes on my phone but now instead I have a notebook I can pull out whenever a writing idea hits me.  I wear a watch so I don’t have to pull out my phone for the time.  I set my push notifications for e-mail to every half hour so I’m not getting reminded every single time I get a new e-mail.  I deleted my Facebook app so I’m not tempted to pop on there whenever I want.  It’s so much less appealing to log into FB on Safari when I want to check it, so I spend a lot less time on FB as a result.  (Just a friendly reminder: if you follow suit, sign up instead to follow my blog via e-mail!)  I do need access to the phone during the day in case I get a call from my kids’ school (which has happened a number of times) asking me to pick them up.  I do need to get texts in case something changes for carpool.  So I have the phone nearby, but only with sounds for calls and texts.  Everything else can wait.  And once the kids are home from school I put the phone in my room and shut the door.  I’ll run back to check it every half hour or so, but that way I’m not standing there in the kitchen texting away while they’re trying to talk to me.  I limit myself to writing blogs and book ideas while the kids are in bed.  I get up an hour early to do devotions and write most mornings.  I also sometimes use the girls’ naptime (okay, rest time for my 5-year old who outgrew naps three years ago) to get on the computer.  Technology isn’t a bad thing in and of itself.  It’s what you make of it and how you do or don’t allow it to dictate your life.

So now what, dear friends?  What changes do you need to make in your own use of technology?  Remember, the choice is yours.  Limit your use (and that of your children) as much as you can.  Focus instead on the relationships in your life that really matter.  Make sure your kids and spouse know that they’re far more important to you than a little phone.  It’s hard to take a step back from the technology that so permeates our world today, but trust me, it’s so worth it.  Your kids will thank you for it.

photo is Texting by ElCapitanBSC

2 thoughts on “Living With Technology”