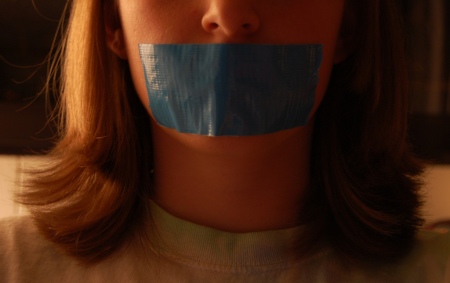 Be careful of what you say. In a world of political correctness, that’s good advice. It’s politically incorrect to say that Jesus is the only way to heaven. Those who dare to make such a claim are labelled “intolerant” and “unloving.” If we dare to take a stand on a moral or social issue, as Phil Robertson did against homosexuality, we start a firestorm and are called “haters.” Hence, many Christians have found it easiest to just say nothing. But let me introduce you to a group of people who weren’t concerned about being PC. Let’s see what we can learn from their example.

What group of people am I talking about? None other than the apostles of the early Church. These guys were about as politically incorrect as they come. They talked openly about Jesus everywhere they went. Everywhere. In a Jewish synagogue? Yep. In jail with criminals? Check. In…gasp…political arenas? Oh, yes.  It was as natural to them as breathing. They wouldn’t have even considered not witnessing. It’s who they were. They didn’t “get to know people” first to “earn” the right to witness to them. They didn’t offer exciting programs to entice people into their synagogues. They just spoke of Jesus. That’s all. Oh, and they did this all the time. Some listened and believed. And yes, they did build relationships with people along their journeys. Some became invaluable supporters and partners in ministry with them. But their bluntness also caused them problems. They were thrown into prison, put on trial, flogged, and persecuted for their bold witness. But still they spoke. This news was too good not to share.

We often look back in awe at the amazing rate of growth in the early Church. It was unprecedented and unparalleled since. After Peter’s sermon on Pentecost, 3,000 people were added to their number (Acts 2:41). When Peter and John were speaking in Solomon’s portico, 5,000 men believed the word they had spoken (Acts 4:4). They were arrested and given the strict charge not to speak again in the name of Jesus. But what did Peter and John do? They returned to their fellow believers and prayed together for strength and boldness to continue spreading the Gospel. And God answered that prayer. Acts 4:31 says, “When they had prayed, the place in which they were gathered together was shaken, and they were all filled with the Holy Spirit and continued to speak the Word of God with boldness.” And the Holy Spirit mightily blessed their witness.

Consider these passages: “The Lord added to their number day by day those who were being saved” (Acts 2:47). “More than ever believers were added to the Lord, multitudes of both men and women,” we read in Acts 5:14. Acts 6:7 tells us, “The word of God continued to increase, and the number of the disciples multiplied greatly in Jerusalem, and a great many of the priests became obedient to the faith.” Wow. Just, wow.

So why don’t we have that same phenomenon today? Yes, that was a special time in Church history, and we aren’t promised that kind of growth today, but don’t use that as a cop out. Frankly, when was the last time you shared the Gospel with anyone outside a Sunday School or Bible class or your own home? I’m going to wager a guess that most of us aren’t sharing our faith like the apostles did. I rather imagine that if they lived in our culture today they would still be sharing their faith openly. Talking to the clerk at the store who rings up their groceries, inviting their kid’s baseball coach to church, witnessing to their server at a sit-down restaurant, telling the kids on the playground about Jesus… In short, talking about Jesus all the time.

Now, that thought may make you uncomfortable.  I know it makes me uncomfortable. After all, we’ve been conditioned to believe that there’s a time and a place for witnessing, and those instances I mentioned above simply don’t fit the criteria. But why not? When your son’s coach calls a practice on a Sunday morning, why not say, “We have church on Sunday mornings. If you’d like to come with us, we’d love to have you. You can even come over for brunch afterward.” If you run to the grocery store on your way home from church, why not ask the clerk, “Do you always have to work on Sunday mornings? I would really miss going to church if I had to work then, but our church also has a Monday evening service. Would you like to come then?” Why not strike up a conversation with your server at Cracker Barrel sometime? Or tell the kids at the playground the Bible lesson your kids just learned in Sunday school? The point is that there are opportunities all around us, just as there were for the apostles. The difference is that they took those opportunities while many times, we do not.

The study note for Acts 2:42-47 in The Lutheran Study Bible has poignant words for us. “The early Christians lived only for their Lord and for the other members of His Body, the Church. How cheap in comparison is our indifference to the Church; how sad are our compromises with the world. Yet the Holy Spirit still dwells and works among us; we still have the apostles’ teaching embodied in the NT Scriptures. How blessed are we in such heavenly fellowship!” Yes, how cheap indeed is our indifference and our compromises. But the Holy Spirit does dwell and work among us yet today. We have that promise. Make the words of Peter and John your own: “We cannot but speak of what we have seen and heard” (Acts 4:20).

So now go, Christian. Be careful of what you say, indeed, because you never know when God will present an opportunity for you to witness. Pray for boldness when those opportunities come. Remember, the good news of Jesus’ saving work is too good not to share.

Photo is (Self) Censored by Carolyn Tiry