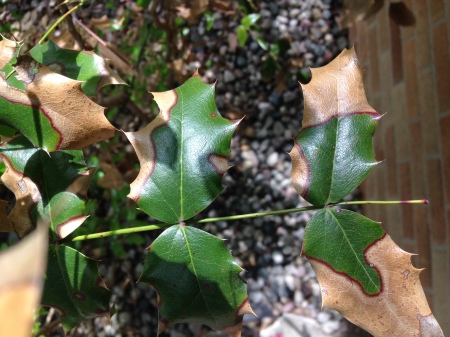 We have an amazing bush in our front yard.  I think it may be a holly bush of some type, based on the leaves, but my knowledge of plants is slim at best.  At any rate, this bush died over the winter, and once spring came the entire thing was an ugly brown.  I didn’t know if I was supposed to prune the branches and wait for new growth, or if the thing just couldn’t take the brutal winter and was really dead.  Once everything else in our yard was starting to bloom again in spring, I finally ventured over to it for a closer look.  What I saw shocked me.  Green leaves were starting to form, but not as you might expect.  As the picture shows, green was actually forming inside the brown leaves.  Those brown leaves I had supposed were dead were turning green from the inside out.  I’d never seen anything like it.  And yet I have, and so have you.

God specializes in bringing life from death, you see.  Each and every one of us was dead in sin.  Ephesians 2:1-2a says, “As for you, you were dead in your transgressions and sins, in which you used to live when you followed the ways of this world…”  The Greek word Paul uses there is “corpse.”  We could do absolutely nothing for ourselves to merit God’s favor or earn our own salvation.  As a corpse can do nothing to bring itself back to life, neither could we.  Yet God didn’t let us remain that way. Ephesians 2:4-5 goes on to say, “But because of his great love for us, God, who is rich in mercy, made us alive with Christ even when we were dead in transgressions- it is by grace you have been saved.”  Wow.  God made us alive even when we were dead in our sins.  Incredible.  Like that bush I had given up for dead, we were by all rights lost eternally with no hope.  Yet God’s great love and mercy breathed new life into us in the waters of Baptism.  When you stop to think about what baptism actually does, it takes your breath away.  Consider the words of Romans 6:3-4, “Or don’t you know that all of us who were baptized into Christ Jesus were baptized into his death?  We were therefore buried with him through baptism into death in order that, just as Christ was raised from the dead through the glory of the Father, we too may live a new life.”  We are literally united with Jesus’ death in Baptism.  It is as if we, too, died with Him on that cross.  But that’s not all.  We were also raised with Jesus in His resurrection.  Life from death.

As we travel through this earthly life, we are still sorely tempted to follow the ways of this world.  That’s why Paul tells us in Romans 6:11 to count ourselves “dead to sin but alive to God.”  Luther’s explanation of baptism, part 4, answers the question “What does such baptizing with water indicate?” in the following way, “It indicates that the Old Adam in us should by daily contrition and repentance be drowned and die with all sins and evil desires, and that a new man should daily emerge and arise to live before God in righteousness and purity forever.”  It’s not a one-time deal, friends.  Once we’re baptized we don’t stop sinning.  Yes, we are united with Christ, but there’s that tension of the “not yet.”  While we are on this earth we will face daily temptations, and we don’t yet see the ultimate realization of our faith.  That’s why each and every day we repent and remember our baptisms, drowning over and over again that Old Adam who is a darn good swimmer.  “Dead to sin but alive to God.”  Life from death.

As wonderful as all this is, the best is yet to come, because even your own death at the end of your earthly life is not the end of the story.  Jesus didn’t stay in that tomb, but rose to life again three days later.  Your mortal body will do the same.  “If we have been united with him like this in his death, we will certainly also be united with him in his resurrection,” Paul tells us in Romans 6:5.  Or again, 1 Thessalonians 4:14 tells us, “We believe that Jesus died and rose again and so we believe that God will bring with Jesus those who have fallen asleep in him.”  Death is not the end, dear ones.  Remember, God specializes in bringing life from death.  Those of us who believe in Jesus will live again even after we die. And Revelation 21:4 assures us that “There will be no more death or mourning or crying of pain, for the old order of things has passed away.”  Now that’s something to look forward to.  Life from death.  Eternally.

2 thoughts on “Life from Death”