Dare to be Different 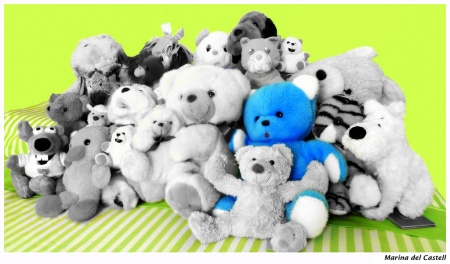 Ever since my last blog post, I’ve been thinking a lot about bearing the cross. Really, the Bible is full of examples of people who had heavy crosses to bear. Think of the prophet Jeremiah. This poor guy was called to proclaim the Law in all its fury to the wayward people of Israel. He had to give news of the exile to a nation who largely scorned or ignored him. He may have been called “the iron prophet,” but he also earned the nickname “the weeping prophet.” Jeremiah really did have a tough assignment. And so it isn’t surprising that at times he broke down and questioned God.

Take a look with me at last week’s Old Testament lesson from Jeremiah 15:15-21. The first few verses are Jeremiah’s complaint. He basically says, “C’mon, God. I’m doing Your work here, but look at the thanks I get.  My pain is unending and you seem far away.  Where are you?” He throws some pretty poignant questions at God, and I can’t say I blame the guy. He didn’t exactly have a popular ministry, nor were people flocking to him to repent from their ways. Most of the time his message fell on deaf ears of the people or got him into trouble with the king.  His questions are very human, a normal response to why “bad things happen to good people.” But God’s response is intriguing to me.

God calls Jeremiah back to the task at hand and tells him he is still His messenger. Then God utters a statement I’d never really noticed before. “Let this people turn to you, but you must not turn to them,” God tells him in verse 19. Think about the other “prophets” in Jeremiah’s time.  “From the least to the greatest, all are greedy for gain; prophets and priests alike, all practice deceit.  They dress the wound of my people as though it were not serious.  ‘Peace, peace,’ they say, when there is no peace.  Are they ashamed of their loathsome conduct?  No, they have no shame at all…” Jeremiah 8:10b-12a reveals.  Those words could easily have been uttered by God to our very own nation today.  There is no end to “religious leaders” who preach a “gospel” of good works, positive thoughts, and prosperity, when in actuality God’s Word teaches something quite different.  It was the same in Jeremiah’s time, and it would have been so very easy for Jeremiah to give in and tell the people what they wanted to hear. But that wasn’t why God called him. And neither is that why He calls you.

In a world of so many false beliefs, it would be easy for Christians to compromise their beliefs in an effort to “keep the peace.” Many Christian bodies have done just that. Homosexuality? Sure, that’s okay. We accept you as you are. We won’t judge. Many Christians just don’t want to speak out against sins, even blatant ones, because they fear they’ll be “intolerant” or “unloving,” so they keep silent.  But what’s really happening when we compromise with the culture? It starts innocently enough, with a tiny compromise here and there, but before you know it, we’ve become indistinguishable from the world around us. We dare not become the voice of the false prophets of Jeremiah’s day, saying only what people want to hear. We have been called to something higher. Harder, yes, but ultimately higher.

Speaking the Law has never been easy.  Just ask Jeremiah.  Ask any of the prophets of old, really.  I can’t say any of them had an easy life that I envy.  But it must be done.  Look now to our Old Testament lesson from yesterday.  Ezekiel 3:17-19 contains some pretty deep words from God to Ezekiel.  He tells him that if he warns a wicked man to turn from his ways, and he doesn’t repent, that wicked man will perish for his sins.  But if Ezekiel doesn’t warn a wicked man to turn, that man will still perish, but Ezekiel will be held accountable for his blood.  Ouch.  How many times do we see others living in blatant sin, yet refuse to speak out to them?  How often do we see others ruining their lives by following a worthless religion, yet we don’t take the time to share the news of Christianity with them?  We might be afraid to be different, we may be scared to stand out in such a bold way, we may not want to make waves.  But we must.

Why do people need the Law, anyhow?  Because without the Law, people don’t have a need for a Savior.  If “all roads lead to heaven,” and we just have to be sincere and try to be good people, why is Christianity any different than any other religion?  People must be brought to despair over their sins before they can receive the beautiful message of the Gospel.  Some people, like most of the Israelites in Jeremiah’s day, are so hard-hearted that they are never ready to hear the Gospel.  They can’t get past the Law.  But for those who despair over their sin and realize that they can’t save themselves, the healing message of the Gospel can work its saving power in full force.  None of us are perfect.  We all sin, and when confronting someone else with their sin, be sure to make that clear.  Don’t project a “holier than thou” attitude, but show them that you, too, are a sinner in need of grace.  Once the Law has worked its power, share the Gospel.  Don’t worry- Jesus has already paid the price.  You are forgiven in Him!  That Good News is unique to Christianity.  Every other religion teaches that if you’re “good enough” you can earn heaven.  Dare to be different.  Dare to stand upon God’s Word.  Dare to preach the Law, and then dare to preach the Gospel.  That message can change lives for all eternity.

Photo is Standing out from the crowd by Marina del Castell