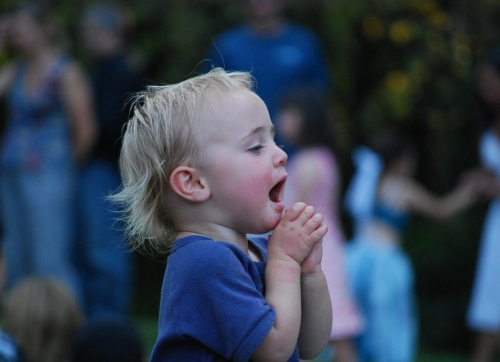 One thing that weighs heavily on my mind as a Christian parent is the question of how to equip my children for sharing their faith in this fallen world. My husband and I try very hard to make our home a safe environment for discussing our faith openly. We have devotions and read the Bible together. Our kids know a lot of Bible stories, Bible verses, hymn stanzas, sections of the Catechism, and prayers. But will they be able to share their faith with others outside the home?

Believe it or not, our kids are already sharing their faith, sometimes more boldly than I am. Consider my two-year-old, whose favorite song is “I am Jesus’ Little Lamb.” She sings at the top of her lungs no matter where we are—at home, in the car, on a walk, even in the aisles of the grocery store. And she may not sing all the words correctly, but she repeats certain phrases over and over. There’s no mistaking that she’s singing “For my Shepherd gently guides me” after she’s sung it twelve times in a row. And then she gets frustrated and asks me to sing the next phrase, so right there in the middle of Meijer I sing back to her, “Knows my needs and well provides me…” Now, who among us adults would warble hymn verses out loud in the middle of a grocery store, unprompted? We just don’t do it. Somewhere along the way we lose that exuberance as we realize that not everyone knows “I am Jesus’ Little Lamb” by heart.

Or consider my five-year-old, who loves art. It’s completely normal for her to draw a picture of Jesus on the cross, and she shows her pictures off to anyone who will take the time to look. “That’s Jesus dying on the cross to save us!” she exclaims proudly, even to neighborhood friends who don’t go to church.

What about my eight-year-old who was playing with a neighborhood friend outside one day? His friend made the comment that her iPhone was more important than the Bible. My eight-year old was appalled and told her she was an idiot, because the Bible was the most important thing in life. Now, granted, insulting others is wrong, and calling her an idiot probably wasn’t the best way to convince her of her folly (although in our neighborhood, that’s considered a pretty tame term), but at least he has his priorities straight and isn’t afraid to say so, even at the risk of offending someone else.

And then there’s my ten-year-old who met a new friend at church. This boy was visiting his aunt and uncle and was apparently not in the habit of church attendance. He and my son struck up a conversation and by the time I got over to them to meet the newcomer, my son had already asked this boy what he believed about evolution and set the record straight on the age of the earth. Um, wow. Not your typical start to a conversation there, especially for 10-year-old boys. But again, he was sharing his faith as he knew how. It’s so natural to him he considers it a normal conversation topic.

When you look at the examples above, it’s easy to see that kids are already sharing their faith. So the question really shouldn’t be “How can I teach my kids to share their faith?” Instead, we should ask, “How can I equip them to continue sharing their faith?” As they get older, they will mature, and their way of sharing their faith will change. It would be odd if my ten-year-old repeatedly sang the same phrase from a hymn in the store the way my two-year-old does, yet I hope that he will mature into a more grown-up version of the same Christian openness. We also need to show our children how to be specific in voicing their beliefs. So how can we accomplish this?

First of all, pray. Pray daily that God would keep them strong in their faith and give them opportunities to talk about their faith to others. Pray that if they have questions about their beliefs they would seek out the counsel of faithful Christians, rather than falling for the lies of a secular professor or a non-believing friend somewhere down the road.

Next, fill your home with Bible talk, prayer, and devotions as much as you possibly can. The world isn’t going to teach them the right things. It’s up to faithful Christian parents to see that their children are taught the faith. Read Bible stories; memorize Bible verses and the Catechism; sing hymns together as a family; and attend church and Sunday school on a regular basis. See that they know the Creed, because really, that’s a confession of faith right there. If anyone asks them what they believe as a Christian, the Creed is a ready-made answer, stating our belief in the one true God and the work of each Person of the Trinity. It’s an invaluable tool. Kids learn by mimicking you. They’re programmed that way. Just as they learned to count by hearing and copying you, so you have to give them the words with which to share their faith. The Creed is the perfect tool for doing just that.

Also give your kids opportunities to practice sharing their faith in their own words. Practice makes perfect, after all, so give them lots of practice. Ask them questions about Bible stories before and after you read them at home. “Okay, I know you’ve heard the story of Creation before. Can you tell me what God made on the first day? What about the second day?” If they don’t know the answers, no big deal. Let them hear the story again and then ask them the same questions. It reminds them that even if they’ve heard it before, they don’t necessarily know it all. They can still benefit from hearing it again.

Another way to get kids to practice is by asking them to tell a Bible lesson in their own words. This past summer, my kids and I did a Bible time with the day campers at our church, as well as a Bible lesson with some kids at a local homeless shelter. I usually read or told the stories, and it was good for my kids to see me as an adult sharing my faith. But by the end of the summer, I had my kids tell the stories themselves. We practiced beforehand so I knew they knew what they were saying, and I would always summarize and review it afterward, but it gave my kids a chance to tell the familiar lessons in their own words outside the safety of our home. Look for ways to do the same with your own kids, even if it’s calling a grandparent to tell them their latest Sunday school lesson.

Finally, as your kids get older, get tough with them. Teach them apologetics and show them how to defend their faith. Let them ask questions, even if you don’t know all the answers. At some point, they won’t be under your roof anymore, and then they’ll be vulnerable to attack from the world. So it only makes sense to equip them for that well before they leave the house. I already ask my kids pointed questions: “Is it really fair that you can only go to heaven if you believe in Jesus? What if you’re a really nice person who does a lot of good work and gives a lot of money to poor people? Would God really send someone nice like that to Hell just because he doesn’t believe in Jesus?” Make them think it through, and help them out if they aren’t sure what to say. “There are a lot of brilliant scientists who believe the world appeared by chance and humans were formed through natural evolution. Aren’t we just naïve to think God spoke the universe into existence?” They’ll eventually meet people who will grill them with these same questions anyhow, so make sure they’re equipped to answer such things. If they have questions of their own, address them honestly. Don’t just gloss over their questions by saying, “Don’t question the Bible! Just believe it!” While that may have some truth to it, that’s not going to help them if they’re really struggling with something. Find a faithful pastor to assist you if you aren’t sure how to answer their questions on your own (that models how to ask for help, too, which is a habit they will need someday).

Thankfully, parents, you aren’t in this alone. God, your Heavenly Father, loves your children more than you do. He has already called them to be His own, and they are already sharing their faith as they know how. With His help, your children will grow into faithful and mature Christians who are well equipped to share their faith and pass it on to their kids in turn.

Author’s Note:  I wrote this article originally for the blog Sister, Daughter, Mother, Wife, and it was posted on October 28, 2014.