What Does This Mean? (Beyond Confirmation Class) 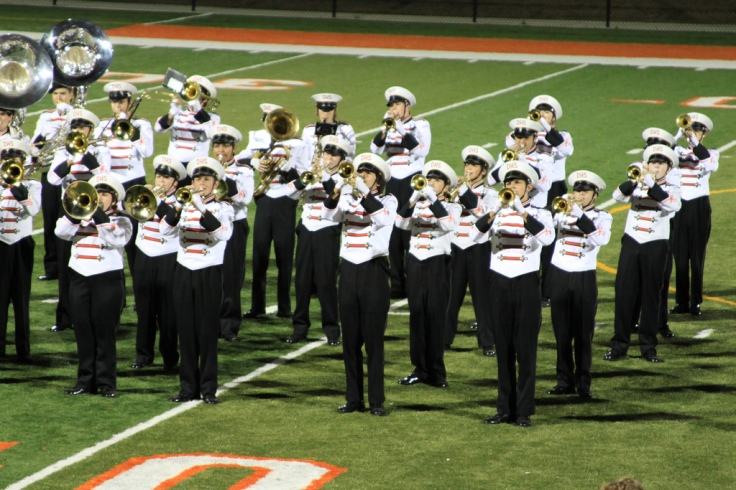 I can practically sing “Phantom of the Opera” in my sleep. My son is in the marching band, and their program was “Phantom” this year. Besides the fact that he practiced it at home, we also have the advantage of living but two blocks from the school, and therefore we can hear the band when they practice outside. We heard “Phantom” every school morning, every Monday night when they had three-hour clinics, every halftime show for home games, and every weekend in October for competition.

But here’s the thing–the harder the competitions got, the more they practiced. You’d think by the time they’d done it a few times, they had the thing pretty well under their belts, but no. They worked on fine tuning the performance, sometimes quite literally. They held chords to figure out which instrument was out of tune. They played the same sixteen measures over and over to make sure everyone was stepping exactly where they ought. They needed to know every single detail about their part, and know it well. It was inspiring to observe their focus and dedication. And it’s a good lesson on what it means to live as Christians in the world.

Think back with me to your middle school days. If you’re Lutheran, you were probably required to memorize much of the Small Catechism, as well as key Bible passages for confirmation class. This is certainly a good thing. But then what? Unfortunately, many people view confirmation as a graduation of sorts. Whew, that’s over! I don’t have to remember all that stuff anymore! one may think with relief, much as one would think of a final exam. But that’s entirely backwards. Looking back to the marching band’s first performance of “Phantom” at a halftime show, it was fairly rough around the edges. The students knew their music and steps for the most part, but a few kids stepped the wrong way or missed a note here and there. They weren’t nearly as precise as they were when marching for the competition by the end of October. Those extra weeks of practicing ad nauseum paid off. By then, the kids knew their parts.

Is not the same true of growing in the Christian faith? We wouldn’t say that an eighth grader knows everything he or she needs to know for math or English, but too often that’s the attitude we have toward confirmation. Friends, the catechism isn’t a one-time deal. It’s something that grows with the Christian and takes on deeper meaning throughout one’s life. An eighth grader may be able to quote the sixth commandment, but it’s probably not an issue she’s grappled with at that point in her life. It becomes much more pertinent as she hits high school, college, and starts considering marriage. A confirmation student can probably quote the meaning of the second article of the Apostles’ Creed, but will he be able to recall it when his college roommate asks him what he believes about Jesus? It is simply folly to relegate the catechism to a couple of years of confirmation class in middle school. The catechism is a tool for us to use all our lives through, with deepening understanding as we do so.

So what does this look like, exactly? To start, test your own memory on the Ten Commandments, Apostles’ Creed, and the Lord’s Prayer. If you can’t quote them all, this is a great place to begin. Make it a family affair if you have kids. Start with one thing at a time and add more when they’ve mastered that. For example, start with the First Commandment and its meaning, then move on to the Second Commandment. This can easily be done at mealtime. Work your way around the table so everyone gets a chance to quote a section of the catechism each evening at dinner. Sprinkle a goodly dose of Bible verses along with the catechism selections. In Deuteronomy 6:7, Moses commands the people to teach God’s Word “diligently” to their children. According to the Lutheran Study Bible notes, the Hebrew word for “diligently” is “shanan,” which is a “verb for sharpening by repeatedly running the blade over a whetstone. Parents are to teach God’s Word faithfully and repeatedly to their offspring.” I love that. Faithfully and repeatedly.

But don’t stop with teaching your kids. Just as my son’s band practiced more in earnest as they got further along in the competition, so we as Christians need to prepare ourselves spiritually the older we get and the more temptations we face. Work through the explanation of the Small Catechism, where Luther asks and answers questions about the six chief parts and lists Bible passages that are pertinent. Read faithful commentaries on Scripture or work through solid Bible studies.

A year from now, my son may still be able to play his part of “Phantom” for memory. He may remember some of the steps. But he won’t remember it nearly as well as he does now. Ten years from now, he won’t remember his steps at all. In his adult years, he may even struggle to remember the name of the program they played this year. As the old adage goes, If you don’t use it, you lose it. Mind you, this doesn’t apply to justification. When we stand before Jesus on the Last Day, He’s not going to quiz us and only let us in if we pass the test. He has already done everything needed for our salvation. We need not fear.

Then what’s the big deal? Simply this: if you are not immersed in the Word, participating in worship services regularly, and studying the basics of the Christian faith, you leave yourself vulnerable to the attacks of Satan and the world, who will try to snatch that faith from you. When discussing the armor of God in Ephesians 6, Paul lists but one offensive weapon—“the sword of the Spirit, which is the word of God.” Jesus modeled this for us Himself. When He was tempted, each time He refuted the devil by quoting Scripture. Clearly, there is great power in the Word of God. So bask in the treasures God is waiting to give you as you read and study His Word, no matter how long ago you took confirmation.