Lost in the Fog 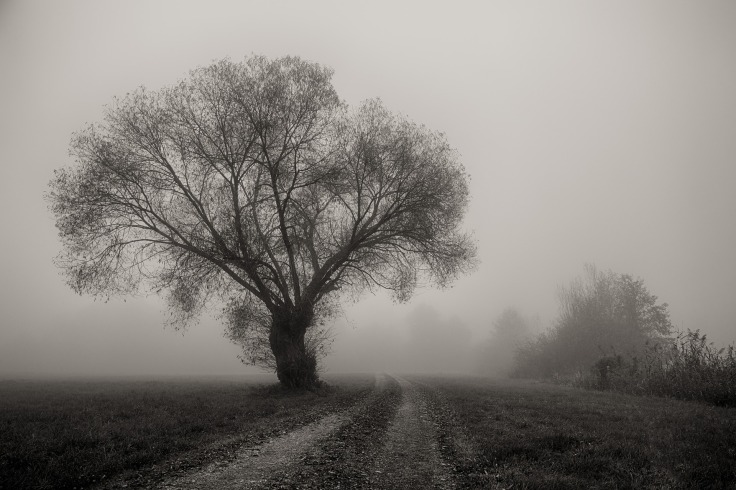 Driving in heavy fog is very unsettling. Yesterday morning I had to drive to church in such conditions, and although it’s a road I’ve taken dozens of times before, everything looked different in the fog. Each turn seemed unfamiliar, large trees weren’t visible until we were practically next to them, and cars coming from the opposite direction didn’t emerge from the fog until they were pretty close to us, which was startling and a bit scary. I was on edge the entire time, not knowing if a deer would suddenly leap out in front of me or a car would pull out without being able to see me coming. I felt disoriented, but I was not lost. I may not have been able to see a hundred yards ahead of me, but I knew I was on the right road, and I knew that road was going to get me to my destination.

Being on the right road is important. Anyone who’s ever missed a turn or taken the wrong road can tell you that. On our honeymoon, back before the days of iPhones and Google maps, we took a wrong turn on our way to Gatlinburg, TN, and ended up in North Carolina. North Carolina is a lovely place, but it’s not where we intended to go. We were on the wrong path.

The Bible speaks often of being on the right path, but it’s not giving advice on getting to Gatlinburg. It’s talking about a much more important path—the way of salvation. Jesus tells His followers in Matthew 7:13-14, “Enter by the narrow gate. For the gate is wide and the way is easy that leads to destruction, and those who enter by it are many. For the gate is narrow and the way is hard that leads to life, and those who find it are few.”

In other words, there are a great many people who are lost out there, wandering in the fog or driving down the wrong road. They may not even know they’re lost in the first place. Or they might think they’re on the right path even when they aren’t. But just because you think you’re going the right way doesn’t necessarily mean you are. We believed we were on the right road to Gatlinburg all those years ago, but that didn’t change the fact that we crossed into North Carolina. And the stakes are so much higher when it comes to the Way of Life Jesus speaks of. We aren’t just talking about a detour; we’re talking about eternity.

Thankfully, God doesn’t leave us to find the way on our own. Psalm 16:11 says, “You make known to me the path of life; in your presence there is fullness of joy; at your right hand are pleasures forevermore.” And in the well-known words of Psalm 23:3, we are assured, “He leads me in paths of righteousness for his name’s sake.” God not only points us in the right direction, He leads us on that way. Specifically, what is that way? Jesus.

In John 14:6, Jesus clearly tells His disciples, “I am the way, and the truth, and the life. No one comes to the Father except through me.” Don’t fall for the world’s lies that there are many ways to heaven, or that it doesn’t matter what you believe as long as you’re sincere. Stay on the narrow path, fixing your eyes on Jesus. The way may be difficult. At times you may feel like you’re driving in fog, unable to see everything clearly, coming upon obstacles suddenly and without warning. But remember that Jesus is with you every moment of the journey. You’re on the right road, and it will get you safely to your eternal destination.