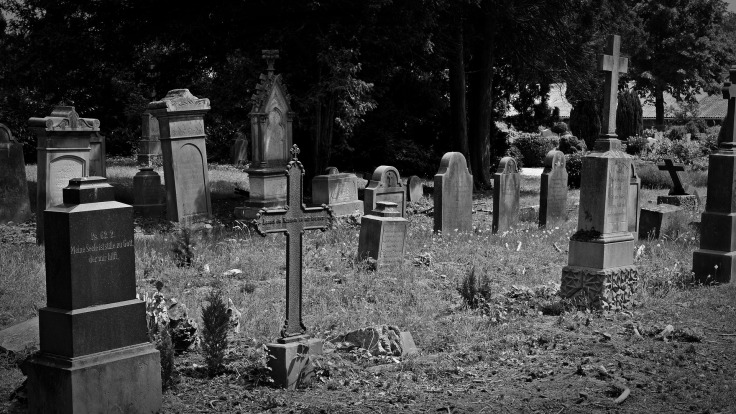 A visitor to church might have wondered what was going on yesterday. All Saints Sunday is somewhat of an unusual one, as we remember with joy the deaths of those saints who have gone before us. In churches around the world, we took time to list the names of church members who have died within the past year. We even sing in gory detail about the deaths of the saints of old:

They have come from tribulation And have washed their robes in blood,
Washed them in the blood of Jesus; Tried they were, and firm they stood.
Mocked, imprisoned, stoned, tormented, Sawn asunder, slain with sword…
(TLH 471, v 3)

A glorious band, the chosen few, On whom the Spirit came,
Twelve valiant saints—their hope they knew And mocked the cross and flame.
They met the tyrant’s brandished steel, The lion’s gory mane;
They bowed their necks their death to feel—Who follows in their train?
(LSB 661, v 3)

Nice thing to be singing about with the kids, isn’t it? Being stoned, sawn in half, eaten by lions, burned to death, beheaded… Yep. Nothing to see here, folks. Just an ordinary church service, singing about various ways to die. What is it about Christians, that we’re so obsessed with death?

You may not realize it, but even some holidays are celebrated as a result of death. Valentine’s Day, for example, commemorates the martyrdom of St. Valentine, who reportedly left a note for his jailer’s child on a scrap of paper shaped roughly like a heart. March 17 is the anniversary of the death of St. Patrick, a missionary to Ireland who strongly defended the doctrine of the Trinity. And in the Church Year there are numerous commemorations and feasts that remember the death or martyrdom of a particular saint.

This really oughtn’t surprise us. After all, one of the pillars of our faith is Jesus’ own sacrificial death. Good Friday is our somber remembrance of the suffering and death He endured for our sake. He offered His perfect life as a sacrifice on the cross to appease God’s wrath over our sins. Had He not died for us, His life would have meant nothing. It was His death that atoned for our sins, and every Sunday we thank Him for that death on our behalf.

But that’s not the end of the story. Yes, Jesus died. But if His death was really the end of it, we would have no reason to celebrate; no cause to remember with joy the death of the saints of old. Paul talks about this in 1 Corinthians 15:17-23: “If Christ has not been raised, your faith is futile; you are still in your sins. Then those also who have fallen asleep in Christ are lost. If only for this life we have hope in Christ, we are to be pitied more than all men. But Christ has indeed been raised from the dead, the firstfruits of those who have fallen asleep. For since death came through a man, the resurrection of the dead also comes through a man. For as in Adam all die, so in Christ all will be made alive.”

There it is. This is why we’re obsessed with death. Physical death is but the gate to eternal life with Jesus. All those saints who were martyred firmly believed this and wanted so badly to share this wonderful news with others that they were willing to die for their faith if it meant sharing the Gospel with even one more person.

Dear brother or sister, you and I have this same hope. Jesus assures us that, “I am the resurrection and the life. He who believes in me will live, even though he dies; and whoever lives and believes in me will never die” (John 11:25-26). When we have this assurance, that death is but the passage to heaven, then we can indeed rejoice in the death of our loved ones. We can celebrate the witness of those who have been martyred for their faith, for we know they are now “receiving the goal of [their] faith, the salvation of [their] soul[s]” (1 Peter 1:9).

No, it’s not death with which we’re obsessed after all. Our eyes are fixed instead on the life to come.