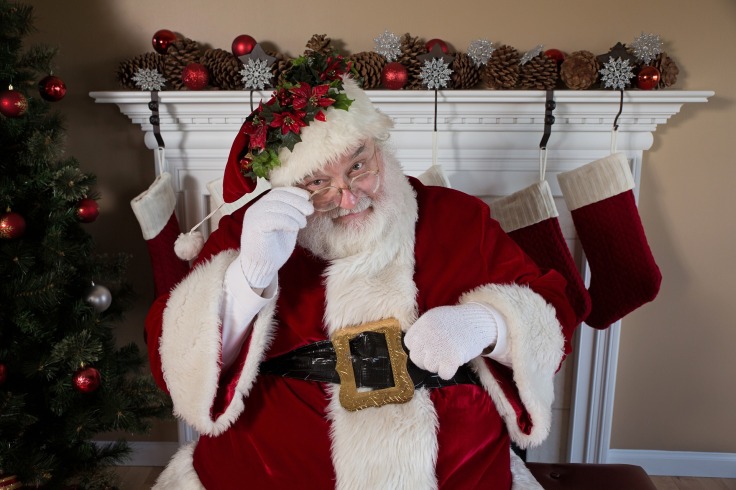 I saw Santa Claus in the post office the other day. He ended up in line behind me as we waited for the postal clerk. Now, my kids don’t believe in Santa, but my three-year-old was gawking at him, so I decided to have some fun. “Is that Santa I see here?” I asked my son. “What’s he doing here? I didn’t think Santa mailed stuff from this post office! Isn’t he supposed to be in the North Pole?” The pretend Santa smiled,  but otherwise remained silent. I have to admit, I was a little disappointed. I’d hoped for an obligatory, “Ho, Ho, Ho!” After all, he was wearing the costume. The least he could do was play the part.

The post office wasn’t the last time we saw Santa. A day or two later, we saw the same guy, dressed up in the same way, pulling a wagon down the road. On his way to a Christmas party, maybe? He was close to one of the day care centers in town, so maybe he made an appearance there. Then, the next day, he was at the elementary school’s family fun night. This time he wasn’t dressed up, but by now, my three-year-old recognized him even without his costume. “What? Santa’s here?” he asked, pointing to the man, who was probably there with his grandkids. Whether this guy wanted to be recognized as “Santa” or not, that’s how my kid knew him. In that sense, he was never really off-duty.

Neither are you, dear child of God. You might be tempted to think of your “religious life” and your “personal life,” as though you only need to be a Christian for one hour of the week at church and then put that identity aside as you go about your “real life.” This is simply not true. Consider how many people are watching you, even when you don’t realize it. I doubt our town Santa Claus went to the family fun night thinking kids there would expect him to be Jolly Old St. Nick. So who is watching you, waiting to see if your actions match your words? When a neighbor sees you interacting with your family during the week, does he see your identity as a Christian? When you go out to eat with friends, do they hear wholesome talk coming from your mouth, as befits a son or daughter of your Heavenly Father? When you attend sporting events, do those around you raise their eyebrows at your reaction to the refs or umps? Do your children see a parent who practices what he preaches?

You will at some point fall short. Your neighbor will hear you yell at your kids, your friends will hear you gossipping, fellow sports fans will hear a few choice words after a bad call, and your kids will see you at your worst. When you do mess up, confess it to the Lord and trust that He forgives you and gives you strength to do better another time. But don’t allow this to be an excuse. Even though you know you’ll fail from time to time, remember that you’re always “on duty” as a Christian.

The Bible is full of exhortations to holy living. Paul encourages in Ephesians 4:1, “I therefore, a prisoner for the Lord, urge you to walk in a manner worthy of the calling to which you have been called.” Peter urges, “Keep your conduct among the Gentiles [unbelievers] honorable, so that when they speak against you as evildoers, they may see your good deeds and glorify God on the day of visitation” (1 Peter 2:12). Philippians 2:14-15 tells us, “Do all things without grumbling or disputing, that you may be blameless and innocent, children of God without blemish in the midst of a crooked and twisted generation, among whom you shine as lights in the world.”

So go, dear Christian. Shine that light—His light—into the world. After all, you never know who may be watching.