The Diagnosis That Saved My Husband’s Life 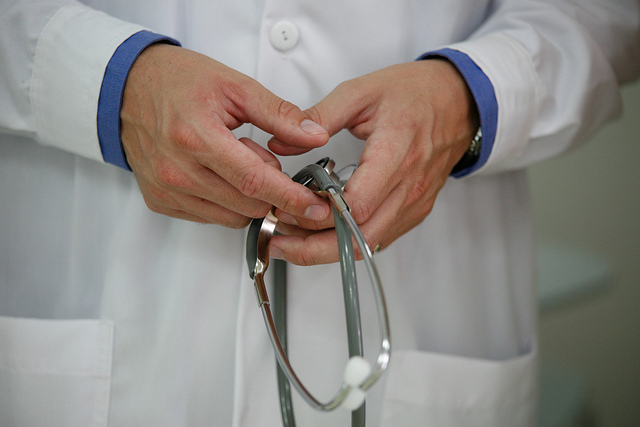 It’s been something of a crazy week. My husband came home early in the week with chills/fever/aches, and I immediately quarantined him to our room, certain he had the flu. It’s been going around our town, to the extent that they cancelled school for two days because 20% of the school district was out sick. But it soon became apparent that my husband had something other than the flu. After a few days of worsening health, he went to the hospital, where they determined he had MRSA, a bad staph infection. They got him on strong antibiotics to fight the infection, because his body can’t fight it on its own. One medical worker told him if he hadn’t sought medical help, he likely would have been dead in three more days. It’s that serious. You don’t want to mess around.

Before my husband could get better, he had to know what was wrong with him. Fighting an illness with the wrong kind of medicine or the wrong dose of the right medicine can be deadly. Nor could his body fight MRSA on its own. He needed outside intervention. Hearing an official diagnosis of a staph infection was a bit scary, but at the same time it was a relief. Once they knew what was wrong, they were able to treat it properly.

As with physical healing, so with spiritual healing. The Law gets sort of a bad rap in today’s society. We’re afraid to offend people by speaking too harshly about sin, and heaven forbid we insinuate that someone else is wrong in his beliefs or lifestyle. Yet the Law is a gift. Without it, we wouldn’t even know we were sick. If not for the impossibly high standard set by the Law, we might be tempted to think we’re pretty good on our own. The Law diagnoses us for what we truly are—poor, miserable sinners. Psalm 38:3 says, “There is no soundness in my flesh because of Your indignation; there is no health in my bones because of my sin.”

What is the ultimate result of this sin? Left untreated, it leads inevitably to death. Spiritual death. Romans 6:23 doesn’t mince words. “The wages of sin is death,” it bluntly states. Yes, sin really is that serious. You don’t want to mess around.

But hearing a diagnosis of spiritual sin-sickness is no different from getting a doctor’s diagnosis for a treatable condition. Sin does have a cure, but it’s something that requires outside intervention. You can’t heal yourself, but you don’t have to. Your Great Physician did that for you. He took your sickness upon Himself and suffered the death that should have been yours. “He himself bore our sins in his body on the tree, that we might die to sin and live to righteousness. By his wounds you have been healed,” 1 Peter 2:24 assures us. And continuing with Romans 6:23, yes, the wages of sin is death, “but the free gift of God is eternal life in Christ Jesus our Lord.”

You have a clean bill of health. You are healed completely, and it doesn’t cost you anything at all. There’s no deductible or copayment or prescription costs. Jesus gives it to you for free. So don’t be afraid of the grim diagnosis. The Great Physician has the cure. And while you’re at it, go ahead and share this wonderful news with others. It’s one diagnosis that has the power to save lives.

Photo is The Stethoscope by Alex Proimos

4 thoughts on “The Diagnosis That Saved My Husband’s Life”