The Best Motivation for Cleaning 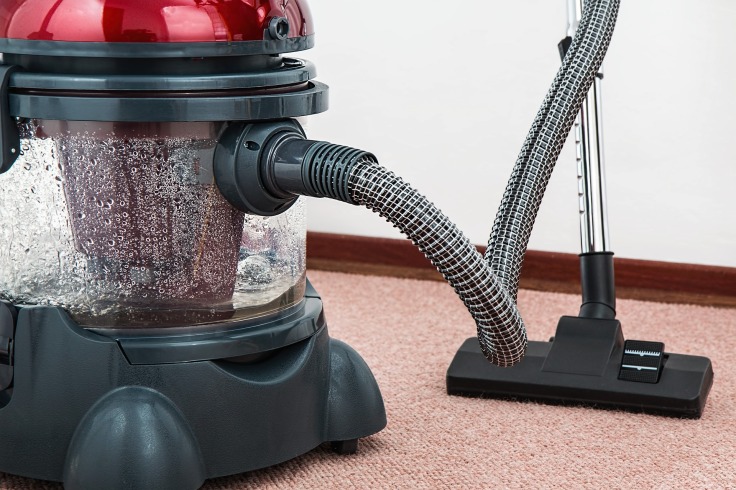 For the past two weeks, my carpets have never been cleaner. You might think I’m expecting guests, but no. Selling and showing a house, perhaps? Not that either. No, the real reason is far less exciting, but it’s highly effective. You see, we have fleas.

Theoretically, I’d love to have a clean house all the time. Realistically, I have five kids and about a million things I’d rather do besides cleaning. (Translation: my house is rarely as clean as I’d like it to be.) But with an infestation of fleas, cleaning is a necessity rather than an option.

Lately I’ve been vacuuming the rooms at least once a day. I’ve used the carpet cleaner at least twice in two weeks, a chore I otherwise do perhaps twice a year. I vacuum our tile floor rather than sweep, because sweeping would just push the fleas away. I’ve even started using the shop vac to go along the baseboards to catch any stray fleas. I do laundry far more often than usual and wash the sheets and bedspreads every two to three days.

In the meantime, our cat has been in quarantine. I’ve given her a flea bath or two, I use the flea comb on her multiple times a day, and I crush (supposedly) flea-killing pills into her food. All of this has helped, but each day I still find one or two fleas on my socks, so I’ll keep vacuuming and cleaning until they’re gone.

For such a tiny insect, fleas sure are a big nuisance. They’re practically impossible to kill. You can’t just squish one with your finger like you could an ant. You have to basically cut them in half with your fingernail, and that’s harder than it seems because half the time they jump away when you think you’ve killed them. Sigh. And since they’re so small, they hide in carpets or clothing or bedding and you don’t realize how bad they are until it’s an infestation.

The really awful thing about all this is that I saw the warning signs, but I chose to ignore them. Our cat was scratching almost constantly, and she had chewed off an entire section of hair near her tail. I’d flea combed her a couple times and gotten some fleas, so I knew they were there. Instead of taking aggressive action right away, I gave her a flea treatment and hoped that would take care of it. Nope. By the time I admitted that we’d have to take stronger action, the damage was done. Fleas (and eggs) were imbedded in our carpets. We all had bites on our ankles. I’d walk out of a carpeted room and pick black specks off my white socks. It was a disaster by the time I chose to do something about it.

Sin is like that too. It’s sneaky and easy to hide and it starts small, making it easy to ignore or rationalize. Most people don’t plan to have an affair, for example. But what starts out as a seemingly innocuous comment here and there can lead to a more flirtatious exchange, texting or calling one another frequently, lunch dates, and so on, getting progressively more emotionally involved until a full-blown affair happens. It could have been prevented had one or both parties heeded the warning signs.

So how can we recognize the warning signs of sin? By knowing and studying God’s Word. Paul admits in Romans 7:7 that “if it had not been for the law, I would not have known sin. For I would not have known what it is to covet if the law had not said, ‘You shall not covet.’” So a better knowledge of Scripture makes one aware of what sin is, as opposed to what behavior is pleasing to God. One resource I find helpful is the “Preparation for Confession and Absolution According to the Ten Commandments” in the back of the Treasury of Daily Prayer (also found in the devotional book Blessings and Prayers for College Students, both by CPH). It goes through the commandments and asks questions about each one to get you thinking about how well you really obey them.

The unfortunate thing is that despite our best intentions and precautions, we will still sin. As it says in “The Order of the Confessional Service” in The Lutheran Hymnal, “if we thus examine ourselves, we shall find nothing in us but sin and death, from which we can in no wise set ourselves free.” Thankfully, Jesus has done what we cannot. “For the law of the Spirit of life has set you free in Christ Jesus from the law of sin and death. For God has done what the law, weakened by the flesh, could not do. By sending his own Son in the likeness of sinful flesh and for sin, he condemned sin in the flesh, in order that the righteous requirement of the law might be fulfilled in us, who walk not according to the flesh but according to the Spirit” (Romans 8:2-4).

Someday (soon!) I hope our house is flea-free. And although I know you and I know we will never be sin-free, that’s not an excuse to ignore the warnings signs. Examine your heart, confess your sin to God, and trust Him when He says He has already set you free. He has cleansed your heart, and that’s the kind of deep cleaning I’ll welcome any day.